Former High-Performance Umpire’s Manager of the Western Australian Football League (WAFL), Darryl Sinclair is finding new meaning in his life working for the Stephen Michael Foundation. Darryl works with young boys and girls at risk.  “It’s a beautiful thing we do.  We help young people from all walks of life find new meaning through sport,” smiled Darryl as he reflected on his journey through football for the past 40 years.  “I have never been as happy, working four days a week, all over Western Australia adding some meaning to the lives of those who are looking for something to do, or just lend a guiding hand.”

Darryl’s life as a footy umpire in country WA saw him run as a field umpire in every one of the 27 country leagues in WA, except one, in his 24 years as a running umpire.  So great was Darryl’s contribution to football he was inducted as a Legend of the WA Country Football League in 2003.  Darryl, to this day is the only umpire to be recognised among club presidents and league executives.

Darryl and his wife Fiona moved to Perth in 2003 where another legend of WA umpiring, Mike Ball recruited Darryl to work as a development coach in the aptly named, Michael Ball Umpire’s Academy.  A role he fulfilled for three years.  It was Darryl’s ability to build relationships with young people that saw him become the WAFL State Umpires Coach in 2007 and by virtue of that role moved into a support role, observing all field umpires in AFL football played in WA.

Darryl was always restless, he was never comfortable standing still and was always looking for ways to get better, to challenge young people and so he continued the strong work of those who went before him and encouraged the youth of the WA umpiring panel to aspire to be better.  By doing that he put some of the “old guard” on notice and made them earn their place on the WAFL umpiring list.  Darryl didn’t apologise for seeking improvement. Darryl retired from the WAFC in 2017.

Many of the umpires who are now tasting success in AFL ranks, including Jeff Dalgleish, Justin Power, Nathan Williamson cut their teeth in WAFL footy, because Darryl’s mantra was to give a kid a go.  Others became very strong WA umpires, Matt Adams, Scott McPhee, Justin Orr, Stuart Parry and Gareth Parker, the latter group responsible for setting the culture and standards in WA field umpiring.

Through the Stephen Michael Foundation, the young participants must agree to contracts to attend school. School attendance has increased by over 50% in some regions. Ten accredited umpires are now umpiring in WAFL junior football and 19 young umpires are umpiring in the PSA competition (Perth Private Schools) in Perth. Keep the kids coming Darryl.

Darryl and Fiona’s two sons, Kyle and Ryan umpired WAFL football until their work took them back into WA country regions where their father started his career many years ago.  “Well you can’t get much more country than Marble Bar,” chuckled Darryl.

Darryl and Fiona, chaperone our WA based Fiona McBurney Match Day Experience families at Optus Oval and still get a real buzz out of their involvement with our Down Syndrome Program.  We couldn’t do it without you guys!

The Stephen Michael Foundation aims to be a leader in community development in WA through assisting youth to achieve their goals and become valued members of the community.

Our programs will develop youth and young adults as people, as well as sports people, regardless of race, gender religion or social circumstance.

Our vision is to enhance the capacity of youth and young adults and support their development as valued members of the community.

Employment: Increase the capacity of youth and young adults to secure entry into the workforce.

Talent: Enhance and support the development of talented youth and young adults.

Sustainability: Ensure the long term viability of the foundation, its outcomes and achievements.

Well-Being: Increase support and ability of youth and young adults to understand and address physical and mental health concerns. 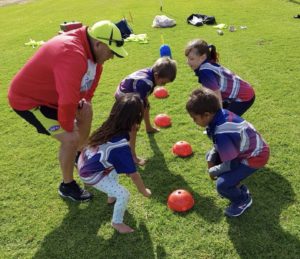