Retired umpire Terry O’Donnell has been coordinating our X-Umpires’ group since taking over from Ron Bailey as the convener earlier in 2022.

A 417-VCFL game veteran, with 5 Grand Finals to his name, Terry’s love-affair with umpiring began as a 17-year-old with the VFL Reserve Grade in 1961.

After joining the VFL Senior Panel in 1966, he continued umpiring at an elite level until 1985. He joined the Western Region Football League in 1986 as their Advisor, a position he held until 2002.

Terry received the Australian Sports Medallion in 2000, and is a life member of the WRFL and the WRFLUA, and is in the WRFLUA Hall of Fame.

Being involved in administration certainly helped, noted Terry when asked about his motivation to get involved with our X-Umpires’ group. “There was a gap, with Ron going, and we needed to take care of that gap. Administration-wise, I enjoy that type of an area, and I have time to do it,” he said.

Having emceed at the AFLUA X-Umpires’ Luncheons in February and March, he has been encouraged by the level of interest from the group. 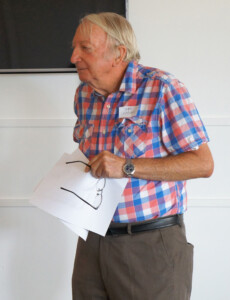 “We have expanded the database considerably, which has made a difference to the number [of ex-umpires] who are coming. There are a few new ones coming now, so that’s good,” Terry said.

Planning ahead, he added, “We’ll get more involved. We’ll continue with our little five-minute segment on one individual each luncheon. Hopefully, we might expand a little bit overall.”

Stories of ‘remember when’ and umpiring anecdotes have proven to be a hit so far in these brief interview segments. Click the links to watch Bob Gilham and Kevin Andrews speaking to Terry in our recent luncheons.

Hoping that these monthly gatherings will continue to reunite the former Men In White in larger numbers, Terry said, “It’s a day out. Most of them are retired. If they’re not retired, they might find the time to come anyhow – just to keep in touch with all the people a lot of them spent a lot of their life with, in the early days. We travelled away a lot together, spent weekends away together.”

Additional information – Our X-Umpires Luncheons provide a great opportunity for former umpires to get together regularly. Please note the upcoming dates for the remainder of 2022 – 28 April; 30 June; 4 August; 1 September; 6 October; 3 November; 1 December.

For more information, and to book a seat, please contact Terry O’Donnell at terry.o.donnell@live.com.au or 0439 724 545.