Umpiring at the elite level, being a published academic author and a University of NSW PhD candidate and coaching the AFL Sydney boundaries – Harrison Hansford wears many hats.

Having played football up to the U17s’ grade, NSW-based Boundary Umpire Harrison took up field umpiring in 2013 and switched to boundary umpiring in 2015 in the AFL Sydney U19s Division One.

Since then, he has clocked 26 State League games and a further 12 AFLW matches. Harrison debuted in Round 2 of the AFLW 2019 (GWS v North Melbourne) at Drummoyne Oval – his home ground when he played footy from Drummoyne.

Besides umpiring at the Marvel Stadium during the 2019 AFLW season, he ranks appearance in the 2019 NEAFL Preliminary Final and participation in the NAB U16s Nationals Camp as his best memories. 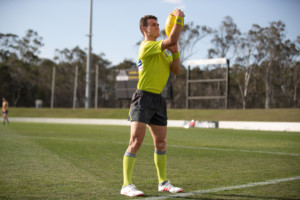 Reflecting on his umpiring journey, Harrison noted, “The opportunity to travel around Australia and umpire in different states has been an awesome experience.”

“The most rewarding part has been the sense of community developed within the umpiring group in Sydney. It keeps me involved at footy at the highest level and keeps me fit and healthy. What job can top that!”

After soldiering through the 2018 State League and the 2019 AFLW seasons, Harrison reluctantly took time off umpiring in 2020 and 2021. A series of knee surgeries had forced him on the sidelines.

Taking the positives from setting small goals during the recovery phase kept him motivated, and he was soon raring to go for 2022 – fitter and stronger.

Harrison said, “Getting back out and being involved in top tier footy again – it’s awesome to run in front of crowds and some of the best athletes in the country. Being able to push myself physically and mentally at this level has also been something I’ve loved doing.”

With his PhD research and academic publications going strong besides his umpiring duties, Harrison reasoned how his diverse pursuits complement one another. “I am someone who has a lot of energy,” he said. “I don’t think I could be able to sit at a desk all day thinking hard about research if I didn’t also have to train and focus on umpiring outside of that. So, they work well together in that respect.”

Harrison enjoys surfing in his spare time. Road cycling is his favourite sport outside of footy. “I’m a big fan of the Tour de France and other major cycling races,” he said.

Thank you, Harrison, for sharing your story with us, and we wish you the best for the future.