Congratulations to Boundary Umpires Ben Fely, Nick Phillips and Jordan Russell, who umpired their first career AFL matches in Round 1 (2022).

With consistent CVs to their names, Ben (584), Nick (585) and Jordan (586) were promoted to the 2022 AFL List. They were proudly awarded AFLUA Heritage Numbers prior to their respective debuts.

Ben ran the line at the Accor Stadium, as Sydney Swans prevailed over GWS Giants 17.10 (112) to 13.14 (92). He mentioned about going through a range of emotions upon hearing about his debut, “I was so excited to be provided with this opportunity and to tell my family and friends. The nerves came later during the week.”

Despite having three NEAFL Grand Finals (2017, 2018 and 2019) and the 2021 AFLW Grand Final in his repertoire, the prospects of umpiring the AFL Sydney Derby were different.

“To calm myself down, I just stuck to my process and usual routine,” Ben said. “I also had the opportunity to grab a coffee before the game with family, which was exciting, as they had all come up from Canberra or down from Brisbane.” 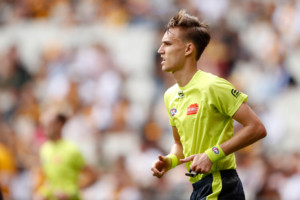 Nick Phillips during the 2022 AFL Round 01 match between the Hawthorn Hawks and the North Melbourne Kangaroos at the Melbourne Cricket Ground on March 20, 2022, in Melbourne, Australia. (Photo by Dylan Burns/AFL Photos)

Reflecting on his debut, he said, “It is an honour to umpire football at its highest level. It’s something I’ve worked towards, and I was happy to achieve one of my dreams.

“I didn’t really calm my nerves going onto the field – just had a joke with the other guys. But still, nerves get to you.” 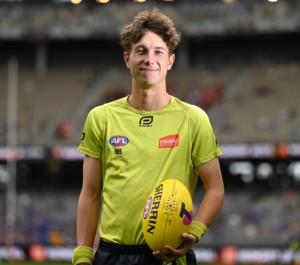 Jordan Russell during the 2022 AFL Round 01 match between the West Coast Eagles and the Gold Coast Suns at Optus Stadium on March 20, 2022 In Perth, Australia. (Photo by Daniel Carson/AFL Photos)

Jordan revealed the message from his fellow umpires that helped him settle down before his debut. “Just to calm down, take that extra second with throws and composure, and don’t go looking to jump into the game – let it come to you,” he said.

“They braced me with how hard the running component and speed of the game would be, and not to go too hard early and burn myself out, as it was a common theme in their debut games.”

Well done, Ben, Nick and Jordan. We wish you the best for the year ahead.

Featured Image: Ben Fely during the 2022 AFL Round 01 match between the GWS Giants and the Sydney Swans at Accor Stadium on March 19, 2022, in Sydney, Australia. (Photo by Michael Willson/AFL Photos)