Field Umpire Michael Pell described the milestone as “a great sense of achievement”, as he umpired his first full match since promotion to the 2022 AFL Field Umpires List.

Michael was one of the three Field Umpires (alongside Nick Brown and Andre Gianfagna) taking charge of the North Melbourne v Hawthorn (Round 1) match. At a 38,000-strong sun-soaked MCG, the Hawks completed a 20-point comeback victory over the Roos 11.12 (78) to 8.10 (58).

Running out onto the field beside experienced colleagues for an intense match-up, Michael summed up his experience saying, “Amazing, and a great sense of achievement, that everything I worked towards has culminated in a moment such as this.

“To do it alongside Nick and Andre, with whom I had a bit to do at the VFL and who have always reached out to me over the years, was really special. They made the experience an incredible one for me and I’ll always hold that dear to my heart.”

He umpired his first AFL game in 2021 as Hayden Gavine’s replacement in the third quarter of Round 21 (Richmond v North Melbourne) at the MCG. But the landmark occasion in 2022 was different. 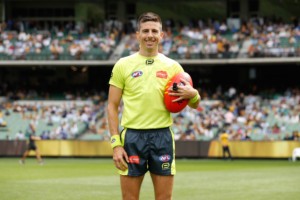 “Well, 38,000 more spectators for a start; and this time people actually knew I was umpiring, and they were watching on in anticipation as they knew it was my debut,” Michael said.

“I think when you come on as an emergency, the expectations are fairly low given the circumstances. But this time I was an AFL umpire, and I had a job to do for four quarters.”

Since starting off umpiring with the Essendon District Football League, Michael has recorded the 2017 TAC Cup Grand Final and the 2019 VFL Grand Final under his belt. He has umpired in 31 AFLW career matches so far, including the 2021 AFLW Grand Final.

Promotion to the 2022 AFL senior list and being awarded an AFLUA Heritage Number (453) come as testaments to his steady umpiring progress. Michael recalled receiving the news fondly.

“I was just so happy. Yes, there was relief. But overall, I was just incredibly happy and proud of what I had achieved”, he said. “I really cherish Adam Davis taking my family and I out for lunch and making it a memorable experience, as he has been a great sounding board for me on and off the footy field over the past few years.”

Well done, Michael, on your promotion. We wish you the best for the year ahead.

Featured image – Michael Pell during the 2022 AFL Round 01 match between the Hawthorn Hawks and the North Melbourne Kangaroos at the Melbourne Cricket Ground on March 20, 2022, in Melbourne, Australia (Photo by Dylan Burns/AFL Photos)