Ty was amongst the officials’ list for the 2022 AFL Round 2 match at the Metricon Stadium (Carrara), as Gold Coast hosted Melbourne.

“I was stoked to get the call, excited all day and just wanted to get out there,” recalled the Queenslander about his AFL debut match. “Heading out onto the ground was exciting. Weird feeling going to a ground you would always umpire at, but have Max Gawn and the rest of the premiers warming up on the same oval.” 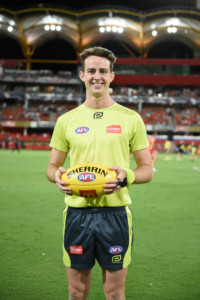 The momentous occasion was more special. Ty took to the field in Carrara with Peter, with whom he has been training on the Sunshine Coast for the last five-six years, and “trying to beat him in at least one session every off-season”.

Since he ventured into boundary umpiring with the Maroochydore QFA Reserves grade in 2015, Ty has progressed steadily.

He umpired his first AFLW match in 2018 (Round 2, Brisbane Lions v Western Bulldogs at the South Pine Sports Complex), and has notched up 34 career matches till date.

This top-tier experience has been an important springboard to the development. “AFLW provides emerging umpires with exposure to a national level elite competition,” Ty noted. “This provides umpires with great experiences such as interstate travel, TV games and expert coaching.”

To prepare for matchdays, his rituals involve eating well, drinking a lot of water, and trying to stay off the legs as much as he can.

Well done, Ty, on your AFL debut! We wish you the best for the future. 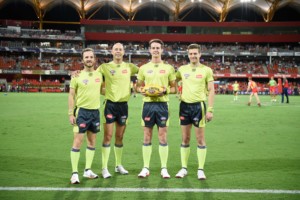 Ty Duncan (2nd from right) and Peter Bock (2nd from left) during the round two AFL match between the Gold Coast Suns and the Melbourne Demons at Metricon Stadium on March 26, 2022 in Gold Coast, Australia. (Photo by Matt Roberts/AFL Photos/Getty Images)