Sydney Swans’ Lance “Buddy” Franklin etched his name into the footy record books as only the 6th VFL/AFL player to score 1,000 goals.

As Buddy booted the Sherrin home from the 50-meter mark, the 36,000-strong crowd went into a pandemonium, streaming out onto the ground to celebrate. Check out the incredible scenes here.

“You couldn’t help but notice the crowd already climbing the fence ready to run onto the ground. As soon as he (Lance Franklin) kicked the ball, you knew it was going through. At that point, I was trying to find Angus in the goals to give the all-clear. Thankfully, we are mic’d up. So, he could hear me, as there was no way he would have been able to see me as the ground was inundated with fans.”

“Anytime in your career, where you get to witness an event like that, is pretty special. No doubt whatsoever – that will be a memory I will look back on and be able to say, “I was there”. It’s an amazing achievement. We obviously are there to umpire the game and fulfil our role. So, you don’t often get to really appreciate what we witness, as we need to move onto the next contest. However, with the break that followed, it gave us a chance to appreciate what Lance had achieved, which was nice.” 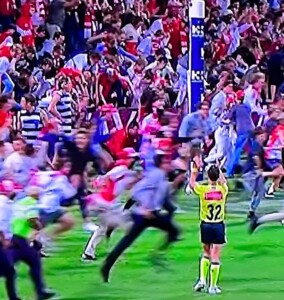 “As soon as Buddy marked it, I had three security guards running in front of me to get over to his side of the ground. When he was on his run up, I could see a heap of people already starting to run over the boundary line towards him. I’m thankful the kick itself was straight over my head. So, I could savour the moment while droves of people were streaming past me. The noise was deafening. The experience was one I’ll remember for the rest of my life.”

“It was a big build-up that had started the week before. Even when I was arriving at the ground, there was already a 500 metre queue to get into the members’ [area] half an hour before the gates opened. The atmosphere was amazing all night.” 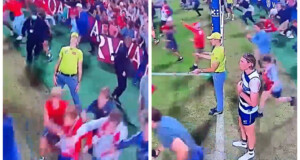 “I was obviously focused on the job at hand and umpiring well, but I’d be lying if it wasn’t in the back of my mind. Every time Buddy got near the ball, the crowd started to lift. He kicked one down my end in the first quarter and I knew I’d have the Swans heading my way in the last. But I still wasn’t convinced he’d kick four. It wasn’t really until he kicked his third towards the end of the third quarter that I thought there was a chance I’d get his 1000th. I’d noticed the crowd had all come down to the fence and were cramming the aisles – waiting for it to happen.”

“The buzz in the last quarter was next level. Once I got back [to] the change rooms after the goal, I just sat on the balcony looking at the swarm of people on the ground while soaking up the atmosphere. It was such a great vibe – almost like a rock concert.

“I feel incredibly fortunate that I was the Goal Umpire on the spot for one of the greatest moments in the game’s history. I’m still pinching myself that I was a part of it.” 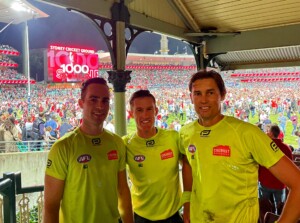 (from left to right) Umpires Jacob Mollison, John Howorth and Rob Findlay at the SCG