Bob Dunball was a larger-than-life man who brought a great strength of character to all those whose lives he touched.  Always a leader, he understood people and called a spade a spade.  He was a much-revered figure in country football as a VFL umpire for the 16 years he umpired at that level.

Bob commenced his umpiring career with the VFL Reserve Grade list in 1964.  He was promoted to the VFL Senior List in 1966 until his retirement in 1981.  In that time Bob umpired 320 VCFL games including 54 finals and 14 grand finals.

Off field his legacy was even greater.  Bob joined the social committee in 1969.  He was elected as an executive member in 1972.  He was Junior Vice President, Vice President and then ascended to the role as President in 1975.  Bob was made a Life Member of the Association in 1976.  He received a Lifetime Achievement Award in 1977 for his services to the Association.  He was an inaugural inductee in the AFLUA Hall of Fame in 2008.

Bob passed away on Monday after a long battle with cancer.  Our thoughts are with his wife Sue and family. 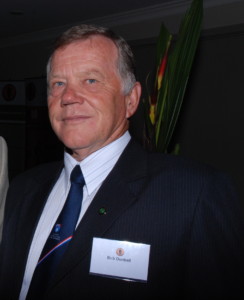