Goal Umpire Tom Sullivan reflected on an “amazing occasion”, as he umpired his first career AFL match in Round 3 of the 2022 season.

Tom, who had been promoted to the AFL Goal Umpires’ list in Queensland for season 2022, took to the field within an umpiring team that included the likes of Eleni Glouftsis, Ray Chamberlain, Robert O’Gorman, Adam Reardon, Matthew Bridges, Peter Bock, Chris Delany and Matthew Konetschka.

Building up to his milestone match, Tom mentioned he went out to lunch with his family beforehand to celebrate. 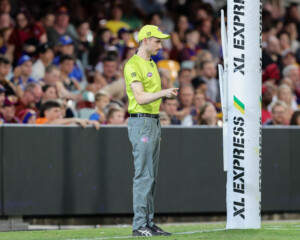 Tom Sullivan during the 2022 AFL Round 03 match between Brisbane Lions and North Melbourne at The Gabba (April 02, 2022 – Brisbane, Australia). (Photo by Russell Freeman/AFL Photos)

Recalling the experience of officiating in what unfolded as an entertaining and high-scoring match, he said, “It was an amazing occasion, and having my family at the game was really special. My fellow umpires got around me pre-game, and just reminded me to back myself in under pressure.”

With the 2021 AFLW Grand Final and four QAFL Grand Finals (2018, 2019, 2020 and 2021) to his name, how did that experience compare to his AFL debut match? “Similar atmospheres, but there was an added level of intensity in my debut, given the increased speed of play,” he said.

Tom started field umpiring junior footy in 2011, and switched to goal umpiring in 2014 with the Black Diamond AFL, before moving up to Queensland at the end of 2017.

Congratulations to Tom on his AFL debut, and we wish him the very best for the season ahead.