Over the years in his umpiring career, field umpire Nic McGinness has learnt to build flexibility into his preparations, to accommodate for the unexpected circumstances that could lead up to a matchday. This mindset came in handy, as Nic made his AFL debut in Round 8 of the 2022 season.

The momentous milestone arrived for him at the Gabba, where Brisbane raced past the winning post 16.9 (105) to 4.6 (30) against West Coast.

Nic, AFLUA Heritage No. 454 awardee, described the experience of making his umpiring debut in front of over 19,000 fans: “I was certainly not expecting to be walking out onto the Gabba for the match at the start of the week! Given the late notice of my appointment, my reaction was one initially of shock and disbelief.”

He continued, “However, as time has passed, and I have since umpired the game, I have felt a great sense of accomplishment in being able to achieve a long-held aspiration. To be able to have the opportunity to demonstrate and execute my abilities ‘on the big stage’, was a privilege.”

Nic shared his AFL debut alongside an experienced officiating team that included Leigh Haussen and Eleni Glouftsis, among others. “The entire team on the night was extremely supportive of me, helped me both on and off field throughout the night, and hence made it very easy for me to fit into the AFL environment,” he said. “I cannot thank them enough for making my first game a memorable one.”

Nic started umpiring with the AFL Canberra Juniors in 2009, and has continued to scale the ranks steadily. He officiated in his first AFLW match in 2017 (Round 7, GWS Giants v Western Bulldogs at Manuka Oval), and has 42 career AFLW matches. 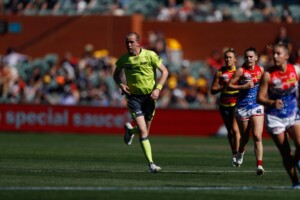 Now, AFL Game Number 1 has been added to his impressive resume – a recognition of the dedication and commitment to his umpiring craft.

How does the experience of umpiring in six Grand Finals compare to his AFL debut? Nic said, “Grand finals are special. They are the pinnacle of our sport and represent the culmination of all the effort and performance that have been invested into a single season.

“To debut at the next level represents recognition of growth and improvement in the level of one’s entire skillset over a period of time. All the experiences that I have acquired to date, across both State League and AFLW competitions, gave me confidence that my abilities would hold me in good stead at this next level.”

For him, the 2019 AFLW Grand Final between Adelaide and Carlton at the Adelaide Oval stands out. The Crows bagged their second AFLW flag in front of a record 53,034 crowd. At the time, it became the largest crowd for a women’s sporting event in the country. “To be able to be part of such a momentous and significant event in Australian sporting history is something quite special,” he noted.

Nic is employed as a school teacher specialising in Economics, Business Studies, Politics and Mandarin Chinese. Outside of Aussie Rules football, his favourite sport is cricket. He also enjoys reading and spending time in the company of family and friends.

With footy umpiring, you cannot help but have a unique moment or two. For Nic, he recalls officiating in matches at the 2011 NSW Combined High Schools State Carnival on a rectangular rugby league field instead of an oval, with rugby league line markings and goalposts.

Congratulations, Nic, on your AFL debut. We wish you the best for the year ahead.