Welcome to field umpire Matthew Young, who has joined the AFL Rookie Umpires’ List for 2022.

A 146-game (*includes NEAFL matches, 2011-2019) veteran of the state umpiring scene, and 11 matches into his AFLW officiating career, Matthew has been going strong for 17 years. 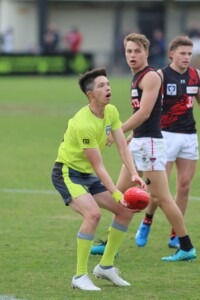 He started umpiring with the AFL Brisbane Juniors Football League, as “a cool first job”, as Matthew, 29, described. But the excitement of being on-field and being a part of the matchday action have continued to motivate him to stay involved in the game.

Now comes further encouraging news for Matthew, with his inclusion in the AFL Rookies’ List. “It came as a big surprise and certainly means a lot to me, as it shows that my development is on the right track to my goal of making the Senior List,” said Matthew on his promotion.

Having made a foray into the top flight of umpiring, what is he looking forward to the most? “Learning from the AFL senior umpires – both at training and on matchdays,” he said.

Matthew’s first VFL match was the Casey v Frankston contest at the Casey Fields in 2015 (Round 1). His AFLW debut arrived three years after at the Norwood Oval, in the match between Adelaide and Western Bulldogs (Round 3).

Umpiring at the AFL U18 All Australian European Tour in Europe is the most memorable moment in his umpiring journey, noted Matthew, and named Brett Allen as his umpiring idol. 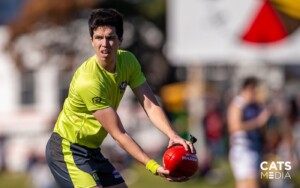 When he is away from the matchday spotlight, not training, or working in his day job as a sports administrator, Matthew enjoys golf and soaking in the excitement of Formula One. Having pasta the night before the matchday is his pre-game ritual.

Congratulations, Matthew, on your inclusion into the AFL Rookies’ List. We wish you the best for the season ahead.