John Moss, Ian Brown and Terry O’Donnell travelled to Yarrawonga on 8th June 2022 (Wednesday), to catch up over lunch with some of our oldest surviving members. Many old stories were told, and many memories revisited.

Thank you to everyone who attended the event, and thanks to the Mulwala Services Club for hosting our umpires’ group. 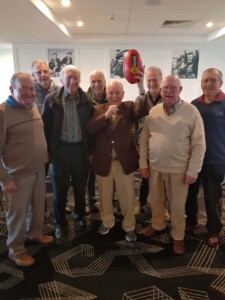