Anzac Day is the day all Australians come together in remembrance. But this year we’ll have to come together in spirit, instead of in person. boundary umpire Ken Creighton debuted in senior football in Round 1, 1940 at Windy Hill. He umpired 13 matches that year but 12 months after his debut he was on his way to the Middle East as an infantryman in the Second AIF.

Fewer umpires served in infantry units during the Second World War than the Great War. Those who did were among the first to join up and went directly into AIF battalions. Those who joined later were often directed into specialist roles related to their civilian occupations or transferred from their conscript role in the CMF to the volunteer battalions of the AIF.

Creighton was in the  2/24 Battalion which saw action in the Middle East and New Guinea. It was besieged at Tobruk and was part of the death blow of the Japanese army at the far end of the Kokoda track. Ken Creighton was present for much of this after joining the AIF on 17 March 1941. After initial training as a reinforcement he departed Sydney and arrived in the Middle East in July 1941. By this stage the British and Australian armies were retreating across Libya having being knocked back after advancing. The 2/24th was part of the siege of Tobruk and Creighton joined the unit during this time. Among the many dangers that Creighton and the rest of B Company were subjected to were artillery and Stuka dive bombing attacks. He penned the following letter to VFLUA Secretary Lindsay Lancaster

We were lying in our dugout one day when all of a sudden one could hear the whistle of bombs when they started to lob all around us, they make a terrible noise when they go off. One lobbed about 15 yards away. Well, I thought it had blown us all to pieces but as it turned out it did not do any damage.

The next day they sent over 60 to 80 dive bombers – Stukas. They are a great plane. Anyway we were sitting around having a general conflab when we heard this noise of planes – they have a different noise to other planes – then all of a sudden down would dive about 20 planes. They would come straight down. I did not think they would come out of their dive but they drop their eggs and swoop away – some would machine gun. 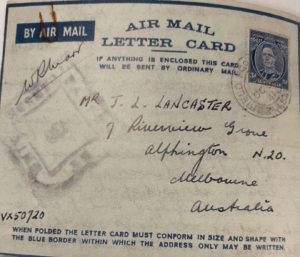 The battalion was withdrawn from Tobruk in October 1941 to recover and retrain in Syria. Their next action was nine months later when they successfully captured and defended important high ground around Tel el Eisa , west of El Alamein.

Before dawn on 10 July 1942 the 9th Division launched an attack on the northern flank and B Company captured the vital Point 33. The Australians spent the next few days fighting off heavy counterattacks as Rommel redirected much of his forces against them. The unit history records of B Company in this action:

Shelling, mortaring and enemy pressure was constant; their remoteness from the rest of the battalion, coupled with the need for digging at night robbed them of practically all opportunity for sleep. They were weary but full of fight and  when enemy tanks came right in amongst our positions, great epics of valour were performed. With cool, methodical defence, the enemy were driven off by the only arms they possessed – infantry weapons. One enemy tank was immobilised and its commander killed when he injudiciously popped his head through the turret to see what was going on
Searle, R. The Second Twenty-Fourth p.175

This was the first involvement of the Australians at El Alamein. The following October after months of careful preparation the main Second Battle of El Alamein began.

Creighton’s part of this great battle began at 0110 hours on 23 October when B and D Companies moved off to attack on an 800 yard front. The British had put up a huge artillery barrage as cover for the initial assault but the advance was made under heavy enemy fire. There were mines and booby traps everywhere protecting the Nazi front line, then barbed wire entanglements. B. Company worked its way through to then be confronted by a machine gun post which they charged and forced to surrender. This was their initial objective and they paused here to dig in as A Company passed through them to continue the attack.

Two nights later they attacked The Fig Garden and in desperate fighting took their objective and many prisoners as well. While the company had its objective they were now under heavy fire and short of ammunition as dawn broke. The battalion reorganised before first light and consolidated their position which they held for two days until relieved on the night of the 27th. There was a large casualty toll but Ken was unscathed through both attacks.

The rest proved short-lived. On 30 October the 2/24th were ordered back to the front to attack a well defended feature named Thompson’s Post.

B Company, including Creighton, advancing on the left behind an artillery barrage soon came up against a number of enemy strong points which they stormed and wiped out despite enemy mortar and rifle fire. Creighton was wounded in the chest by machine gun fire and evacuated to hospital. He was one of a large number of casualties in the action as the other companies suffered from machine gun and mortar fire and were unable to take their heavily defended targets. By 0430 the 2/24th and its sister battalions were withdrawn and their final action in the Middle East was over.

Creighton returned to Australia in February 1943 and after leave and jungle training in Queensland and now part of C Company embarked for New Guinea on 1 August 1943. 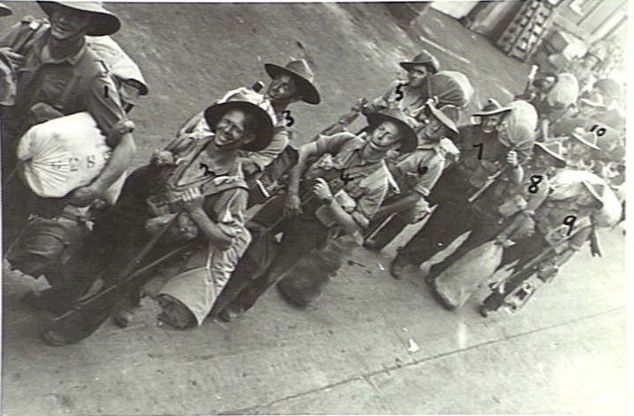 The following month the 2/24th near Lae at Red Beach as part of the attack to take the vital strategic town were art of a pincer movement. They advanced inland but faced formidable natural barriers in the form of rivers swollen by recent rain. They came to a halt at the Busu River, which could not be bridged for two reasons: the 9th Division lacked heavy equipment, and the far bank was occupied by Japanese soldiers. It took them five days to cross the fast flowing river, mostly building makeshift bridges under Japanese fire. Lae was taken on 15 September after the 7th and 9th Divisions finally linked up. The battalion took part in the Sattelburg-Wareo campaign from September to December that involved much close fighting, and aggressive patrolling against a determined enemy in dense tropical conditions. This was followed by a coastal advance and by February the unit was worn out and depleted the result of battle casualties and disease. They were withdrawn to Finchshaffen and sailed back to Australia arriving at Brisbane on 4 March 1944.

During the campaign Ken had contracted malaria for which he was hospitalised on his return. It may have been this which occasioned his transfer to the 13 Australian Army Ordnance Depot in October 1944, if indeed this is where he went.

Intriguingly his service record does have an annotation indicating he was part of ‘Z’ Special a secretive commando force that operated behind enemy lines but, unfortunately, “Z” Special Unit personnel files do not exist. All that is left in the National Archives is the index file page, with name rank and the two serial numbers (ordinary and AK). General Thomas Blamey had the rest destroyed after the war. Whether in Ordnance or ‘Z’ Special Creighton was discharged from the AIF on 29 January 1946 and was back running the boundary in the following VFL season five years after his last appearance.

He would go on to umpire 54 VFL matches before retiring after the  1948 season.

Creighton passed away 22 January 1992. Lest we forget.