Becoming a rookie umpire and being part of the AFL Accelerated Development Program are some key career highlights for South Australian based umpire Jamie Broadbent, who now has been elevated and selected to join the AFL field umpires. He will make the move to Melbourne to join the others in January.

Jamie’s parents and girlfriend are the most influential people on his career to date – his mum for encouraging him to take up umpiring as a youngster and his girlfriend and dad for their support by coming to all games he umpires during the year. Leigh Haussen (Sticks) is his most admired umpire because of his approachable nature and role model characteristics that has helped Jamie develop as an umpire.

Outside of footy, Jamie is a sports lover watching and attending all sport. He also enjoys chilling at the beach, playing lawn bowls, golf, exploring and traveling. With some saying he doesn’t mind listening to a bit of Taylor Swift’s music too. With his undergraduate studies in Clinical Exercise Physiology, he has returned to University and completed a Master in Physiotherapy this year, to add another string to his professional bow.

We wish Jamie all the best for the year ahead. 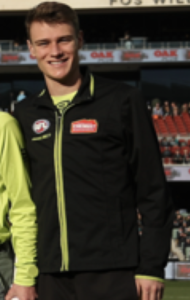 Like many umpires before him, Daniel took up umpiring to earn a bit of pocket money and also because his dad, a former state and grade cricket umpire, encouraged him to give it a go.

Daniel is employed as a physiotherapist and has a passion in sports medicine research. He also likes getting into the gym, seeing family and friends and taking his dog Sasha for walks. He lives with his girlfriend Tara in the northern suburbs of Perth where they bought their first house together.

Daniel enjoys the tight knit group in Perth that includes both WAFL and AFL umpires which provides a great learning platform for upcoming umpires.  He admires Jeff Dalgleish and Dean Margetts for the professionalism that they exude and the amount of training they put into their umpiring. Jeff and Dean are also great mentors and leaders for the WA AFL group and the WAFL group as a whole.

Daniel is a pretty motivated person and loves the routine of training and striving for improvement.  This gives him a lot of personal satisfaction and motivation to do even better. His advice for new up and coming umpires is to honestly self-analyse your own performance and standards and don’t ever get comfortable as there are always things you can improve and get better at.

Welcome Daniel to the AFL Field Umpiring Squad.  We wish you all the best for the year ahead! 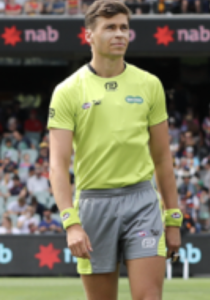 The start to Paul’s umpiring career began when he realised his playing days were over and he still wanted to be involved in the sport.  He began as a goal umpire when he was 15 and decided then ‘that he wanted to be a field umpire one day!’ Obviously, a wise career choice for a 15 year old.

After only four years with the VFL, Paul has been appointed as an AFL umpire for season 2020.  He started field umpiring in 2015 at the Southern Umpires’ Association and before you know it, he was knocking on the door at the VFL, joining the VFL Development Field Squad in 2016. In 2017, he umpired his first VFL senior game, quickly establishing himself and soon featured in VFL finals umpiring the 2018 VFL Grand Final at Etihad Stadium and 2019 VFL Grand Final at Ikon Park.

Whilst the 2018 grand final was a highlight, his most favourite game was the 2018 Preliminary Final between Box Hill and Williamstown. Both Peter Marshall and Cameron Nash have been key influential people in his career as both have installed so much confidence and belief into him. And the support of his wife Hanna and his Mum & Dad.

Paul is motivated by his desire to get better as an individual both as a person and in umpiring. In doing so, his advice to up and coming umpires is to respect your body (recovery and nutrition) and enjoy what you are doing and remember to have fun along the way.

Paul loves the experience of umpiring in Victoria.  In VFL games, you are often dealing / managing AFL players which is great experience for someone trying to break into the AFL.  The facilities at Victoria Park are also very good and something that can’t be taken for granted. He also enjoys access to great coaches at the VFL and AFL and the fact he is umpiring alongside so many like-minded individuals who are all aiming to be the best umpire they can be.

Paul is employed as a Sales and Purchasing Officer with a timber manufacturing company called Big River Group.  He enjoys time on dates with his wife, spending time with their German Shepherd Jake, camping and supporting Melbourne Victory. He also has a baby boy too, named Jude who was born on the 3rd of November.  So, it has been a big month for the Rebeschini family!

Congratulations Paul on your rapid career to date and we welcome you to the AFL list for season 2020. 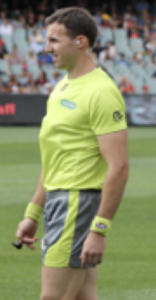