Congratulations to Boundary Umpire Simon Blight, who made his AFL debut in Round 7 of the 2022 season. 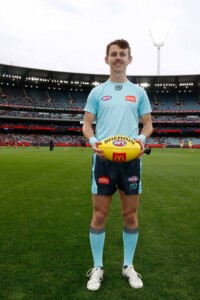 He was awarded AFLUA Heritage Number 588.

Looking back on his AFL debut match, Simon said, “Running on the MCG pitch under the lights, with a crowd cheering, was absolutely unreal. I was buzzing the entire time.”

He added he was quite excited on receiving the news of his appointment to the umpiring contingent. “I had to try and put it in the back of my mind and not get too far ahead of myself,” Simon noted, as he focused on preparing for this milestone match.

What was the message from the umpiring group on the matchday? “The message was to relax and enjoy the experience. Everyone was super supportive,” said Simon.

He was recently elevated to the 2022 AFL Boundary Umpires’ List. With 27 career AFLW matches and 94 VFL matches to his name, Simon had further umpired at two AFLW Grand Finals (2021 and 2022) and the 2018 VFL Grand Final.

Well done, Simon, on your debut. We wish you the best for the season ahead. 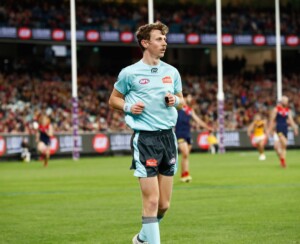