Congratulations to field umpire Samuel Nippress, who has been added to the 2022 AFL Rookie Umpires’ list.

Samuel took up the whistle in 2008 with the AFL Central Australia. He has since progressed steadily – now into his 14th season – and has three AFL Canberra Grand Finals (2016, 2017 and 2020) and the 2021 AFL Canberra Golden Whistle to his name. 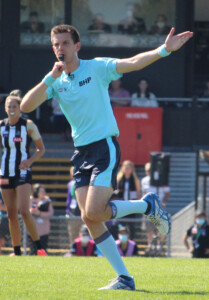 Having made the grade into the AFL Rookies’ List, Samuel is looking forward to learning from the best umpires in the country. He said, “I am really pleased to be given the opportunity to be a Rookie-listed umpire for the 2022 AFL season. It is satisfying to have my umpiring abilities recognised in this way.

“It is a testament to the many coaches, mentors and other umpires who have supported me and guided me throughout my umpiring career. It is also a fantastic recognition for the AFL Canberra umpiring group.”

A family connection to umpiring has been an encouragement for Samuel, with his father Philip and sister Deborah being involved in umpiring footy.

He said, “It was a real privilege to be able to umpire with my dad and sister back in the local AFL Central Australia competition. Dad is a stalwart of umpiring in Alice Springs, and Deborah was a talented goal umpire who reached the state-league level.

“Having a family who is interested in umpiring and invested in my progression, has really encouraged me to keep working hard at my craft.”

Besides umpiring, Samuel is a lawyer and a Parkrun enthusiast. “Whenever I have a Saturday free from footy, I’ll be down at Parkrun – running or volunteering,” he said.

Samuel lists cricket as his favourite sport outside of AFL. As part of his matchday preparations, he aims to memorise the players’ names and numbers for the match he would be umpiring. “My wife graciously tests me on the names each week, so that I feel prepared,” he added.

Well done, Samuel, on your achievement. We wish you the very best for the season ahead.