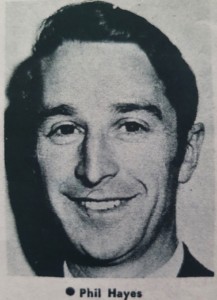 The AFLUA is saddened to learn that Life Member Phil Hayes recently passed away.

Phil Hayes umpired for twenty-two years in some of the best competitions in Victoria and New South Wales, and officiated in nineteen grand finals in that time.

Born Phillip Thomas Hayes on 23 June 1940, he grew up in Coburg until age 9 then moved to Yallourn. He joined the VFL Reserve Grade in 1960 for two years before heading to Bendigo and Geelong with his employment as a teacher. Before returning to Melbourne in 1966, he umpired in Bendigo (1962) and Geelong (1964-1965).

With this experience, he went straight to the VFL senior list. Debuting in the VFL Reserve Grade in May 1967 two years later, he made the jump to senior VFL football. He was awarded Heritage No. 257 upon his appointment to Fitzroy versus Melbourne at Princes Park in Round 8, 1969.

Nerves may have played a part in that first match as the newspapers reported that he regularly ran the wrong way after paying marks or free kicks, christening him ‘Wrong way Hayes’. The VFL Umpires Appointment Board knew better, and he umpired four more matches that year; and over the next three seasons, he totalled 15 VFL premiership matches and a lone night series competition match.

In his career on the senior VFL list, he also umpired 47 Reserve Grade and 87 VCFL matches before moving on following the 1971 season. He finished with a bang, as his final three matches were the Hume, Waranga-North East and Kowree Naracoorte league grand finals.

That form continued when he moved onto the VFA list in 1972 until 1976, where he umpired the First Division grand final in his first year. Phil was president of the VFAUA in 1975.

Employment then took Phil, his wife Glenis and family to Sydney in 1977, where he umpired five Sydney Football League grand finals until his retirement in 1982.

As an associate member from 2009-2012, he qualified for AFLUA life membership that was confirmed in 2013. While still a regular attendee at the VFAUA annual dinners, he was presented with his AFLUA life membership certificate at the 2013 NEAFL shirt presentation in Sydney where he continued to reside until his passing on 9 March 2022.

A well-travelled and well-loved member of Australia’s umpiring community, Phil Hayes will be missed around the country.

Authored by Peter Howe and David Flegg AM