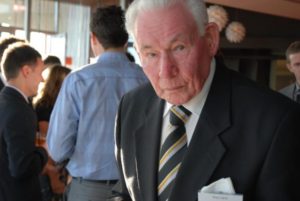 At the time of his birth on 23 June 1920 Australia was a vastly different nation to the one Roland Glanville Caird  left behind at his passing more than a century later.

Roly began umpiring with the VFL Reserve Grade in 1949. It was an era when the VFL goal umpires list was made up mainly of former senior field and boundary umpires who transferred directly to the senior goal list with no experience of the role.

A man of integrity who believed in fairness, Roly was among a group of Reserve Grade goal umpires who lobbied for senior goal umpires to be drawn only from experienced members of the Reserves competition. Their efforts were successful, and the modern era of promotion was begun.

Roly joined the senior list in 1955 earning Heritage No. 125 on debut at Princes Park in Round 1. His life-long friend, Bill Barbour, was the field umpire. The goal umpiring experience paid off on that first day as Roly recalled an incident where Barbour paid a second grab mark over the goal line and Roly had to chase him up the ground to get an all-clear after explaining what happened. Bill and Roly would share the same roles on grand final day 1959; the only grand final for them both.

He made his finals debut in the 1956 First Semi-final, a two-point thriller that saw scores level at the last break and no scoring for 13 minutes of the final term. At the other end of the scale was the 1959 interstate match with Victoria romping home 31.21.207 over Western Australia 3.11.29.

The 1959 VFL Grand Final was close at three-quarter time, but Melbourne kicked away in the final quarter kicking six goals at Roly’s end completing a fantastic season for him.

It was not all plain sailing though. The following year, after the VFL preliminary final Roly was appointed to the 1960 Wimmera Grand Final. During the last quarter, 30 players were involved in a brawl, and it took seven policemen and the umpires five minutes to regain control.  A sensational climax to a spiteful match. Unfortunately, before the match, and through no fault of his own, Roly and his partner ran afoul of the Umpires’ Appointment Board. Mechanical difficulties while travelling to the match in his colleague’s new car meant a late arrival. While the game was not delayed at all the Board felt the need to suspend both umpires for the 1961 season.

Upon his return Roly umpired another nine seasons including the highlight matches 1962 and 1968 VFL Night Grand Finals, the 1965 Victoria v. South Australia match and a less than league-standard Carlton 1.11.17 at home on Anzac Day 1968. He compulsorily retired, aged 50, following the 1970 VFL First Semi-final.

Over 15 seasons Roly umpired 214 VFL premiership, 15 VFL night series and 2 interstate matches. Additionally, he travelled for 46 VCFL finals and representative matches. He became a life member of the VFLUA in 1966.

Roly’s love of golf was a centrepiece of his later years and he played right up until a hip replacement limited his swing. He joined Southern Golf Club at the age of 67 and remained a member for 23 years winning several competitions and scoring a hole-in-one.

Throughout the years following his football retirement Roly kept umpires close to his heart. He attended every VFL Grand Final Boundary and Goal Umpires’ Club Dinner and the subsequent merger of the club with the field umpires in 1996. In more recent years he was a regular and enthusiastic attendee of the X-umpire lunches, even following his move to a retirement community in Mornington after so many years in Murrumbeena.

Regardless of sporting ability or success those who knew Roly spoke of his honesty, loyalty, and sense of fair play. A word he used to describe those men for whom he had respect and who shared these values was ‘gentleman’. And it was not a word to be bandied about.

Roland Granville Caird passed away after a short illness on 11 November 2021, aged 101.

No umpire deserves the description ‘gentleman’ more than Roly and he will be deeply missed by all who were lucky enough to know him.