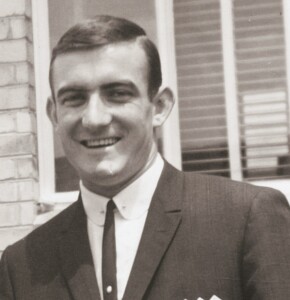 Rod Tanner had a widely variable resume in football. He reached the VFL/AFL pinnacle in roles as umpire and timekeeper, one of only three to achieve that double. Add in player and professional runner to round out a wonderful sporting life.

Born Rodney James Tanner on 5 October 1941 his father, Vivian, was later a VFL umpire in 1951-52 paving the way for his son. Before taking up umpiring in 1957 Rod played football for Preston Wanderers Collingwood Thirds and Reserves.
Beginning umpiring on the boundary in the Metropolitan Football League, he joined the VFL Reserve Grade in 1960 and in 1962 umpired the VFL Reserve Grade Grand Final. Promotion to the senior list followed in 1963.

He earned Heritage No. 318 when he debuted at Victoria Park in Round 3 and saw a rare North Melbourne win at the ground. His first of five finals came in 1964 and was followed by VFL grand finals in 1965 and 1968.

At the end of 1968 after 88 day matches and a further 5 night matches, including one of the first four-boundary umpire trial matches in 1966, Rod transferred directly to the senior field umpire list. He umpired around Victoria until 1972 officiating in 72 VCFL and 7 VFL Reserve Grade matches. The final two matches of his VFL career were grand finals at Milawa (Ovens and King) and Paynesville (Bairnsdale and District). He received AFLUA life membership in 1973.

While umpiring Rod had also run professionally and finished second in the 1964 Stawell Gift.

Returning to football with the AFL in 2000 he took up a role as timekeeper. Between 2000 and 2013 he worked in about 200 AFL matches including the 2003 AFL Grand Final. He was a regular attendee at the X-umpires’ lunches in recent years.

Always jovial, not afraid to express an opinion and an umpiring and football stalwart over six decades Rod will be dearly missed by all who knew him.

Rod passed away suddenly at home on 9 December 2020.