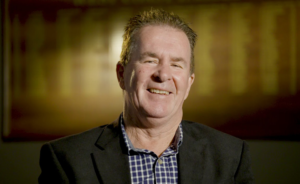 For more than two decades Mike was a leading umpire in the WAFL, VFL and AFL.

He was at the forefront during the greatest period of change in the game when he became the first non-Victorian appointed to the VFL Umpiring panel in 1987 at the start of the transition to a national competition. He umpired 301 Senior games including 45 in the VFL/AFL competition. He was the first non-Victorian to umpire a VFL/AFL final – a drawn final between West Coast and Collingwood at VFL Park in 1990.

Not just an on-field contributor Mike was the President of the WANFLUA from 1989-1990 and was involved as an umpires’ coach and as the Umpire Development Manager after he had finished umpiring. Even after these roles were finished, he has also shown a keen interest and involvement in the development and journeys of young umpires.

Rather than coming via the second eighteens competiuton Ron was one of the few who came directly onto the senior list from the Victorian Fiootball Assocition.

His VFA ties went back to his playing days with Yarraville Football Club Reserves and Thirds. They were his local team given his birth on 6 Febraury 1932 and early days in that area. He began umpiring with the VFA as a boundary umpire in 1951, moving to the field in 1952 and having his application for transfer to the VFL senior list approved for the 1955 season.

For the next 12 years he covered all the major VCFL competitions and a number of the ‘outside competitions’ that requested VFL umpires for thier finals series. While not apponted to a senior VCFL grand final the highlights were the reseves grand finals in the Alberton (1958) and Mid-Murray (1961) leagues. His two Second Eighteen matches occured in August 1958.

Roderick Eric Leffanue began umpiring with the VFL Reserve Grade in 1960 and completed three seasons before being promoted to the VFL senor list for the 1963 season.

Between 1963 and 1972 he umpired 158 VCFL matches and 4 Metropolitan matches. This included two VCFL reserves finals; 1971 Ovens and Murray Second Semi-final and, his final match, the 1972 Murray League First Semi-final.

He was awarded VFLUA life membership in 1973.

Ronald John Dalton was born in Melbourne on 9 October 1937 ad grew up in the South and Port Melbourne areas.

Beginning umpiring in 1960 with the VFL Reserve Grade he was promoted to the VFL senior list for the years 1963-1965. During those three years he umpired 31 VCFL and 2 Metropolitan matches. Work commitments saw him retire early in the 1965 season.

He did return to umpiring in the mid-1970s as a goal umpire in the VFA.

Born Norman John Downwer in Maidsgone on 5 Febrary 1939 he grew up in Melbourne’s western suburbs where he played football for Maidstone in the Footscray District Football League. He won a best clubman award and ultimatley life membership at the club.

He began umpiring with the VFL Reserve Grade following his playing career and 1965 was his only year as a member of the VFL senior list. In that year he umpired 9 VCFL and 1 Metropolitan matches before continuing his umpring at the Footsray District Football League.

Graeme George Galletly was born on 14 April 1940 and grew up in Murrumbeena and Reservoir where he played football for Reservoir Colts in the Preston and District JFL. This was the same league where he began umpiring in 1962.

In 1964 he was accepted on to the VFL Reserve Grade list and two years later promoted to the VFL seniors.

Known always as Dick, Richard John Gillivour was born on 15 October 1927 and grew up in Preston and Reservoir where he played football for Rivoli FC (Preston DFL), East Brunswick Methodists and Preston VFA Reserves.

He took up umpiring with the VFL Second Eighteens in 1952 and umpired there for four seasons after which he was promoted to the VFL senior list.

In his two seasons with the VFL he umpired 28 VCFL and 2 Metropolitan matches.

He returned to the the playing side of the game in 1958 taking on the player-coach role at Portarlington Football Club and leading them to the 1958-59 Geelong Football League premierships. He was later awarded life membership.

He had been a handy footballer playing with Fitzroy Thirds and Reserves before taking up the whistle with the VFL Second Eighteens in 1952. In fact he had played in combined VFL Second Eighteens team versus Werribee Districts team June 1949 and later umpired this same fixture in his first umpiring season.

Retired from VFL with bad knee but went on to umpire with the Footscray District and Werribee football leagues.

Bob Swainson served football and umpiring in a range of roles in Victoria and later the Australian Capital Territory.

Robert John Swainson was born in Footscray 29 July 1937 and gre up in Maidstone. After playing football for the Maidstone Football Club he began umpiring in 1958 with the VFL Second Eighteens. After three seasons he was promoted to the senior list and umpired there for seasons 1961-1965.

During this time he compiled a career consisting of 81 VCFL and 2 Metropolitan matches. His last three matches were VCFL finals in the North Central FL thirds, Picola FL and Kowree-Naracoorte FL seconds.

Following his VFL career he umpired with the East Suburban Churches FL from 1969-74 before moving to Canberra.

In the ACT he was heavily involved with the local umpires association as treasurer and president of the ACTAFLUA and later as a member of the Umpires Appointment Board, assistant umpires observer and umpires observer for the ACTAFL.

Bob Swainson passed away after a short illness on 8 June 2019 aged 81.

Born Ian Robert Trainor on 17 April 1935 he grew up in the Brunswick, Moreland and Coburg areas.

While not a footballer he was a premiership cricketer for West Moreland Baptist Church, a golfer and later in life a lawn bowler.

Ian began umpiring as a boundary with the VFA in 1952 before transferring to the field in 1956. He transferred to the VFL Second Eighteens in 1959 and then was promoted to the VFL senior list in 1962.

At the VFL he was listed for two seasons officiating in 29 VCFL and 1 Metropolitan matches.

His football involvement contiuded later as vice-president at the Essendon District Football League 1972 and assistant umpires Advisor at EDFL 1972-73.

John Llewellyn Williams was born on 19 September 1947 and was on the VFL Reserve Grade list of umpires in at least 1967 when he was appointed to a Latrobe Valley match when the senior list was short of umpires.

Promoted to the senior list in 1970 he compiled a successful career in the next eight seasons.

He umpired 18 VFL Reserve matches in both the one and two-umpire systems and 118 VCFL matches. This latter toatl included 14 finals and 5 grand finals. Three of those grand finals came in his most successful season 1976; Omeo and District, Mallee nd Kowree-Naracoorte football leagues.

Off the field John was a contributor to the VFLUA with a seat on the Social Committee from 1973-1975.

John’s body was discovered on 8 December 2020 having passed away some days earlier. He was 73.