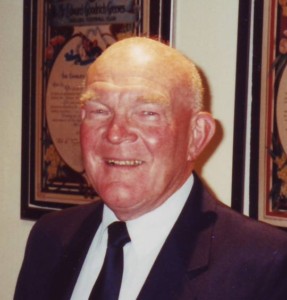 Mark Turner, a seventh ballot (1971-1980) inductee into the AFL Umpires’ Association Hall of Fame and subsequently elevated to the status of Legend has passed away aged 91.

As VFLUA secretary from 1960-1970 he managed association affairs for a decade which saw a season average of 170 members, an expansive social program and in which the move towards a more industrial focus began. His 12 years of executive service in a 13-year association involvement was recognised in so many ways including one of the few formal association farewell dinners attended by many from both within umpiring and the football world in general.

Born Arthur Mark Turner in Melbourne on 17 May 1930 he was always known as Mark or more jovially in association circles, ‘Curly’. Growing up in Middle Park and South Melbourne he played football for South Melbourne Thirds and later Glen Iris United in the South East Suburban Churches Football League (SESFL) being a premiership player in 1951-52.

He began umpiring in 1957 with VFL Reserve Grade and after two years was promoted to the VFL list beginning his career at Yarraburn before walking off after the 1971 Ovens and Murray Reserves First Semi-Final at Yarrawonga 13 seasons later. In the intervening years he umpired 235 VCFL matches including 19 finals and 3 grand finals.

Despite not umpiring a VFL Reserves match he does have a VFL senior statistic to his credit. In Round 3, 1965 he was the emergency umpire at Brunswick Street for Fitzroy versus Melbourne when boundary umpire Ray Calway retired from the match with an upset stomach during the quarter-time break. Curly ran out the last three quarters with Cliff Green.

Having joined the VFLUA in 1959 he was elected secretary in 1960 and would hold that office for the next 11 seasons. Managing an Executive Committee, Social Committee, various ad hoc sub-committees, statistics, milestones (both football and personal) and liaising with the VFL and its Umpires’ Appointment Board as well as a myriad of other duties was an enormously time-consuming job, yet he handled it with efficiency and aplomb. Each year in his report he exhorted members to become involved with their association in words which indicated the passion he held for it.

That passion remained until the last days of his life. He rarely, if ever, missed a Presidents and Secretaries’ Luncheon and was actively advocating for another inductee’s elevation to AFLUA Hall of Fame Legend status.

Issues of the era included finals ticket allocation, provident fund, umpire retention and the ever-present fees negotiations. Every president commented on the support they received, and, in turn, Mark was vocal in his thanks for the support he received from his beloved wife, Betty.

As further contributions to the game from 1958-1970 he also umpired in the Sunday Victorian Public Service competition and was umpires’ advisor to the Bentleigh-McKinnon Junior Football League from 1964-1971.

His service to the VFLUA was recognised with honorary life membership (1964), a Lifetime Achievement Award (1969) and the later AFLUA Hall of Fame induction and Legend elevation.

Turner departed the VFL following the 1971 season and immediately joined the SESFL as a field umpire from 1972-77, then to Southern Umpires 1978-82 where he then took on the role umpires’ advisor in 1983-84. Returning to the SESFL as a goal umpire from 1985 -1991 he was ultimately made a life member of that body.

Mark Turner’s contribution to Australian football in general and umpiring in particular deserves every accolade and celebration that it received. His passing on 10 August 2021 will be deeply felt by both contemporaries and those who came to know him over a lifetime of service and achievement.