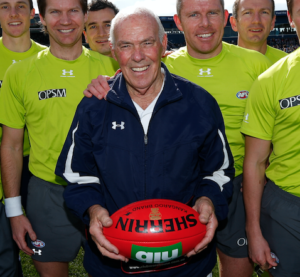 George Mather, born at Sunshine on the 30 December 1928 was one of 11 siblings. – four boys and seven girls.

In 1945 George joined the West Footscray Football Club where he played in the under 18s for one year, before being promoted to the senior side playing in the notorious Sunday Football It was a tough competition. After a few years George noticed an advertisement in the daily newspapers for umpires with the Victorian Football League Reserve Grade.  He applied and in 1950 was accepted as a boundary umpire. Training between Albert Park and Royal Park under the watchful eye of Norm Price, the following year George took up the challenge and took charge of training for the reserve grade, a position he held for many years.

George was becoming very enthusiastic about his umpiring in the Suburban Metro Leagues as well as the VFL Under 19’s and Reserve Grade games as a boundary umpire, and occasionally when the VFLRG were short George would help out as a field umpire.

In 1962 he decided to stand for the VFL Reserve Grade Umpires ‘Association Executive Committee and over the next seven years he was heavily involved; as vice-president in 1965 he was also awarded life membership of the VFLRGUA and succeeded to the presidency the following year. From 1968-69 he held the position of social secretary just prior to his retirement.

Following retirement and still in days where field umpires provided their own trainers George took up a position as umpire’s trainer with Ian Coates. His skills were in high demand and resulted in other umpires regularly requesting his services.

In 1972 a position became available in the VFL for a goal umpire’s fitness coach. George was nicknamed ‘The Sadist’ by the goal umpires for his strenuous training sessions in a reign lasting more than two decades.

While the AFL did not keep any official record of George’s appointments he estimated that he officiated in 400 games including several field umpiring appointments, and one semi-final appointment for the senior list when they were short one year. We do know he umpired the 1957 and 1959 Second Eighteens Preliminary Finals

In recent years George took great interest and pride in his grandson Josh’s AFL career on the boundary.

Few can match the contribution of George Mather to umpiring over such an extended period and to maintain the respect and love of generations of umpires points to a man of remarkable generosity and spirit.