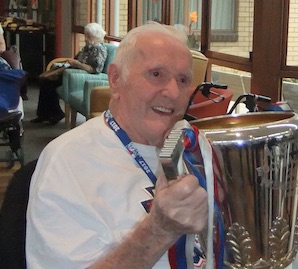 Frank had an outstanding strong history as an umpire and was always an “association man.”

Frank was a boundary umpire with the Spotswood footy club from 1949 until 1953, before joining the VFL Reserve Grade Umpires in 1953.  He was a boundary, field and goal umpire in his time on that list before retiring in 1976.  He became a life member of the VFL Reserve Grade Umpires’ Association in 1962 or his service as president of that group in 1962 and secretary from 1966 to 1971.  Actually invited to join the VFL senior list as a field umpire in 1965 he couldn’t accept the invitation because he could not get the time off his work to get to training.

After leaving the Reserve Grade he joined the Western Suburbs Umpires’ Association in 1977 and was secretary for 2 years of that group.  He spent 16 years as a trainer with the Western Bulldogs (formerly the Footscray Football Club) and is a life member of that club.

Frank commenced with the AFL as an umpire’s trainer in 1995, a position he held until 2013.

In the early years in the job, Frank would drive from his home in Altona to Monash University in Mulgrave picking up ice, lollies and linen from Alsco in Yarraville along the way.  He would then return the linen to Alsco on his way home each night. When training located to Visy Park in Carlton which provided for a shorter trip, Frank still purchased lollies and made the return trip to Alsco.

First  to training each night Frank would have everything prepared for the trainers in the rub down room and for the umpires when they started arriving at 4.30pm.  He would also be the last to leave well after 8pm each night after meticulously packing up and accounting for all of the equipment.

Frank gave up his match day training duties when he lost that acceleration to get on and off the field of play quickly.  He relished looking after the needs of all of our umpires.  A confidant to a few and a mate to many more.  He was always the first point of call for anyone coming into the rooms unannounced or unwanted!

Frank also ran the Easter and Mother’s Day raffles and would collect the lolly money donations from umpires.

In increasing ill-health over the last few years of his life he was supported by the AFLUA and it’s umpires, a sign of the esteem in which Frank was held.