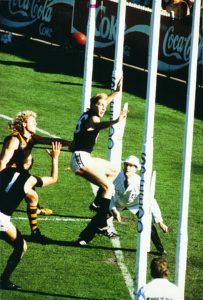 There would be few who enjoyed their umpiring more than Doug Purss. He loved match day and being a part of footy on the field, he loved the social aspect and having a drink or two with his umpiring mates. Maybe he didn’t love the physical aspect of training but he was always there making it fun.

Doug was born in Moorabbin on 29 April 1954 and played junior football for the McKinnon Demons and later cricket for the Moorabbin CC. His best man Michael Roache and 1987 GF partner notes he was a gun cricketer and played with the VFLUA CC for many years.

In days when the rotation policies for a big list of goal umpires meant going regularly from senior to reserves to U19s there wasn’t much opportunity to build big numbers. In 1986 Doug’s first final was his 17th match and the 1987 Grand Final was his 28th. His second Grand Final was the classic 1989 Geelong v. Hawthorn match and was his 57th.

Doug retired at the end of the 1992 season his 105th and last game was that year’s first semi-final. He had also umpired two State of Origin matches and a London exhibition match. After he retired he took on roles as Advisor Southern Umpires Association 1993-95 and Goal Umpires Observer VFL 1996-2004.

Doug will be remembered as goal umpire that nothing phased. He was always in control, he seemed to never rush but was always where he needed to be to make a decision. His signals were so smooth and he understood the theatre of VFL football.

Doug passed away on 23 July 2019 after a long and courageous battle with motor neurone disease.