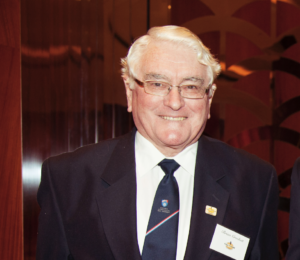 Brian Crockett was an association stalwart. Until his ill health earlier in 2019 he was a regular attendee at our X Umpires luncheons at Mornington and more recently Caulfield. He always attended our past president’s luncheons and was a great supporter of our umpiring family.

Brian became a life member of the VFLUA in 1979. He was awarded a Lifetime Achievement Award in 1980 for his services to the association and more recently was a member of the AFLUA Century History Publication Sub-committee. Brian was one of the first inductees in the inaugural AFLUA Hall of Fame in 2008.

Born Brian James Crockett on 2 December 1936 he grew up in country Victoria in various places including Heyfield, Maffra and Sale, he played football for the Sale Football Club in the LaTrobe Valley, playing in the reserves premiership in 1956 and two senior premierships in 1957 and 1959. He moved on to play with Carrum in the Mornington Peninsula League and Kooweerup Football Club in the West Gippsland Football League. Brian also pursued his interests in tennis, golf and cricket.

In 1966 Brian began umpiring with the VFL Reserve Grade until his elevation to the VFL Senior Panel in 1969. Between 1969 and his retirement in 1980. Brian umpired 224 VCFL matches including 8 grand finals.

After serving on the VFLUA Social Committee in 1972-73 he was elected to the Executive Committee in 1975 and held the vice-presidency of the VFLUA in 1976-77, becoming president in 1978. A year in which the VFLUA negotiated fee increases but clashed with the VFL over as the association continued to investigate sponsorship.

Brian passed away on Thursday 6 June surrounded by his wife Anne and family.