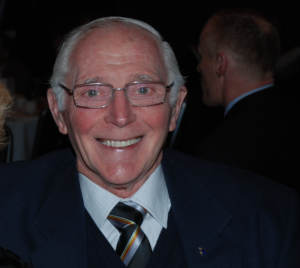 Bob Flanagan had a lengthy and successful career on the field as both a VFL and VFA umpire but remained a humble man noting of his time as a member of the VFL Umpires Appointment Board, “I was a 22-game VFL umpire trying to give advice to blokes like Robinson, Smith, Sawers and Deller”.

Robert James Flanagan was born in Northcote on 20 May 1932. He played football at Prahran Technical School and later began umpiring social matches. Enjoying the experience he joined the VFL Reserve Grade between 1949 and 1951.  Bob was promoted to the VFL senior panel in 1952 where he umpired until he retired in 1962.

That first year signalled great potential as he umpired Reserve Grade football as well as a final in the West Gippsland league. Almost all of 1953 was in the reserves and in mid-1954 he debuted in the VFL. It was a single match, South Melbourne v. Essendon and earned him Heritage No, 220. Two more senior matches in 1955 led to his most successful run in 1956-57. His final VFL day game was Round 13 1957 and his final senior appointment that year’s night-semi-final.

Bob continued with the VFL until 1962 ultimately compiling an impressive record:  22 VFL, 41 reserves and 155 VCFL matches including 12 grand finals.  He also umpired in 14 Tasmanian games including 1 grand final.

Bob then moved to the VFA to umpire between 1963 until 1977 officiating in 201 senior matches.  He became a city observer with the VFL Umpires Control Board between 1978 and 1979.  In later years he sat as a tribunal member for the Mornington Peninsula FL between 1984 and 2000.

Bob was a regular at the X-umpire luncheons.  He was always ready to lend a hand and prepared to offer a point of view.  He cared about the people in umpiring.