Congratulations to Victorian field umpire Jordyn Pearson, who made her VFL debut this month in Round 7 (Essendon v Box Hill Hawks) at Windy Hill. After Annie Mirabile and Eleni Glouftsis, Jordyn is now the third female field umpire to have officiated in a VFL match.

She also became the second female field umpire to officiate in an AFLW Grand Final when Jordyn adjudicated in the Adelaide-v-Melbourne 2022 title-decider at Adelaide Oval in April.

A teacher by profession, she commenced umpiring in 2012 with the Essendon District Football League and has continued to steadily scale the ranks.

Reflecting on these two significant milestones so far in 2022, Jordyn said, “I was shocked, excited and pleased when I was told I would officiate the AFLW Grand Final. As a teacher, my students were asking me when I would find out if I got the game. So, it was pretty cool to be able to tell them I had been lucky enough to be appointed to the game.

“Being advised that I was debuting in the VFL Seniors, was completely unexpected. I was working and missed the phone calls from Heath and Hayden, and didn’t find out about my debut until I arrived at training that night. Chris Kamolins jumped the gun and said congratulations before I actually knew I was umpiring the game.

“It’s a testament to all my coaches, mentors and umpires’ teams who have provided me encouragement, support and guidance throughout my umpiring journey so far. These have been unbelievable experiences but have also reminded me I have a long way to go to make it at the elite level.

“I have learned that there is no substitute for hard work both on and off the track, and that I can never get ahead of myself. Each step is a process that needs to be done well.” 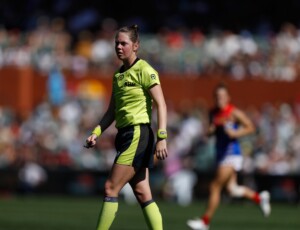 She was awarded the 2016 EDFL Golden Whistle. The 2018 EDFL Premier Reserves Grand Final followed suit. Jordyn made her VFLW debut in 2019 (Round 1, Essendon v Casey Demons, at Windy Hill). A year later, she was appointed to her maiden AFLW match (Round 6, St Kilda v Richmond, at RSEA Park).

Jordyn has clocked 16 AFLW and 13 VFLW career matches so far.

As she has clinched new umpiring accolades this year, she played down any added pressure of attention that comes with the territory.

“I didn’t see it as extra pressure as such, as I had been well prepared by coaches. I knew I had done my own preparation in the lead up to the games. It was a sense of excitement, mixed with relief and satisfaction,” she said. “I felt privileged to be able to achieve something only a few females have achieved so far. I felt proud to be representing the AFL, the VFL and Umpires everywhere, my coaches and my family.”

Eleni Glouftsis, Chelsea Roffey and Annie Mirabile – experienced trailblazers in the female Australian Rules umpiring scene – further inspired her, noted Jordyn. “It is challenging to look forward and imagine what could be. So, having female role models at the highest level has helped me,” said Jordyn.

“They have showed me what is possible. More importantly, it has helped to change perceptions. Females, who may be thinking about an umpiring career, can see there is a pathway for female umpires to achieve higher goals.”

Although there have been challenges for Jordyn along the way, she has remained unfazed and powered through the learning pathway.

She needed to undergo surgery a few years ago to overcome a leg injury. Being a female umpire in football has had its moments as well. She also needed to find a balance between her teaching career and umpiring.

Jordyn has continuously realigned her umpiring goals and learned to trust the process, to better understand the requirements and adapt to umpiring at the elite level.

She credits her coaches, mentors and family to help her forge ahead undeterred. This has given her more confidence and developed her interpersonal communication prowess, which has also aided her as a teacher.

What would be her message to other females aspiring to take up Australian Rules umpiring as a profession?

“Just do it. It’s so much fun, you have the best seat in the house to every footy match! You make life-long friends and you make some money while doing it,” Jordyn said. “It helps you with your ability to relate to people at all levels, decision-making, confidence, and how to think under pressure. It also keeps you fit.” 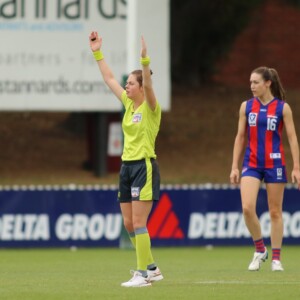 Jordyn Pearson umpiring in the VFLW

Outside of footy, Jordyn loves cricket. When she has time to relax, she enjoys spending time with her family and her dogs, and watch footy on the TV.

Following the same pre-game preparations is one constant for Jordyn, so her mind is settled and in the zone. She always eats pasta for dinner and ice-cream for dessert the night before a game. The matchday breakfast menu consists of porridge with banana and honey, and coffee. She likes to arrive early at the venue and go for a decent warm-up routine.

Jordyn recalled the funniest umpiring moment of her career and said, “It has to be me getting tripped over by the ball before the AFLW Fremantle v Bulldogs game, which got caught on camera and then somehow got onto social media in record time. My students at school absolutely loved seeing me fall over.”

Well done, Jordyn, on your umpiring achievements so far. We wish you the best for the season ahead.