Callum Leonard’s first AFL game was in a word ‘unusual’.  After 10 years on the VFL list, Callum was appointed as a Rookie umpire in July to cover for Adam Wojcik who was injured after tacking Dusty Martin.  On Saturday night 31st July, he received a phone call from Chris Appleton (AFL Goal Umpires’ Coach) informing him he would be jetting off to Launceston to umpire his 1st AFL game the next morning. Little wonder, he got little sleep on the Saturday night! 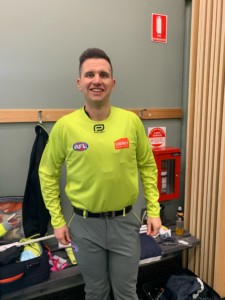 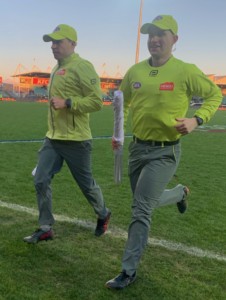 As if a first game wasn’t enough, flying to your first game in another state just adds to the experience.  Callum flew to Launceston to umpire the Hawthorn v Brisbane game at York Park. Having never umpired at the ground, Callum said it was great to get onto the oval and soak up the atmosphere.  His first decision was a fairly routine behind from about 25 meters out, but it was good for Callum as it helped settle his nerves.

Comparing AFL football to state league, Callum says the skill level at AFL is probably the most noticeable difference with the way players move the ball and being so precise, which creates the intensity and speed of the game.  Having a crowd also draws you into the game and makes the experience even more enjoyable.

Callum was nervous about using the score review system but luckily no decisions were super close that he needed to use it.

Off field, Callum likes to catch up with family and friends over coffee or wine. His motto ‘Life is too short to drink bad coffee and wine’ is one shared by many of his umpiring colleagues.

Well done Callum and congratulations on your 1st AFL game!