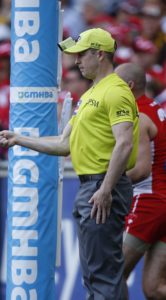 This is the AFLUA’s most prestigious award as it recognises both on-field performance and off-field commitment to the AFLUA. The specific criteria for this award is:

Struck in 2000, this award is named in recognition of Leigh Keen who, throughout his career, consistently demonstrated those qualities that form the criteria against which this award is judged.

Leigh Keen umpired 184 VFL matches including 12 finals of which two were Grand Finals, 1988 and 1991. He was appointed to the VFL list in 1982 and officiated at his first senior VFL match on the 3rd April that year – Heritage Number 179. He completed 12 seasons and retired after the 1993 season.

Throughout his career, he involved himself in AFLUA affairs serving as Treasurer from 1983 to 1986, Secretary in 1989 and as AFLUA Statistician from 1988 until 1993. He was awarded Life Membership in 1991 and later received a Lifetime Achievement Award for outstanding service by a Life Member.

In addition to his outstanding service to the VFL / AFL and VFLUA / AFLUA, he has acted as Goal Umpires’ Coach for metropolitan umpiring groups and as Goal Umpires’ Observer with the VFL, roles in which he has been able to pass on his knowledge and experience to young umpires. Leigh still serves the Association as part of its Heritage and Traditions Project team.

Throughout a magnificent career, Leigh Keen has demonstrated in a humble and selfless manner, all of the qualities that typify this award, and it is fitting that it is named “The Leigh Keen Shield” in recognition of his outstanding service and achievements.