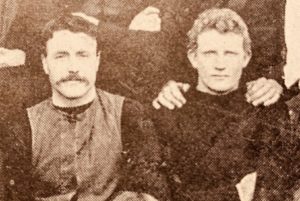 Compiling the list of pre-1938 office-bearers has been a lengthy process but this week a big piece fell into place.

The change in AFLUA structure with the reinstatement of the vice-president role encouraged us add the known VP office-bearers to the web site and while doing so we stumbled across a previously unnoticed article that provided the final outstanding president – 1910 George Hastings.

The president for 1910 was the only one missing but an unreadable story from the microfilm of The Herald 28 June 1910 was reprinted in the much better filmed Ballarat Star of 29 June 1910.

While we had seen and noted the original court case, none mentioned his association status and this later fallout only came to light with the digitising of the Star.

Born in Belfast, Northern Ireland Hastings was a skilful, flamboyant Essendon centreline player and played in the 1897 and 1901 premiership teams. Rheumatic fever and a knee injury ended his playing  career in 1903. In 1905 he began umpiring and the incident at St.Kilda ended his VFL career in mid-1910, having umpired 8 VFL matches as a field umpire and 76 on the boundary, including the 1905, 1906 and 1908 Grand Finals.

There is some evidence that following his VFL resignation Hastings moved onto the Metropolitan Association (now VAFA) for the remainder of 1910 but that his umpiring career finished at that point. He returned to Essendon  as a committeeman between 1936-38. Hastings passed away in 1956.

Elected as the first VFLUA president in 1909 we now know that he was also elected the following year. Bob Boyle is now also added to the now complete list of association presidents.

Amongst other revelations  from these newly digitsed newspapers are:

The hunt goes on!